That’s the apology that Twitter sent out to three users whose accounts were used without their knowledge in Twitter’s blog post about its TV ad targeting product.

As SFGate.com reported, Twitter was caught making up tweets for those three users in a screenshot that was published on Twitter’s blog. In the original screenshot, Twitter created tweets from those three that talked about a San Francisco business called The Barista Bar. Here’s the original image as captured by SFGate.com. 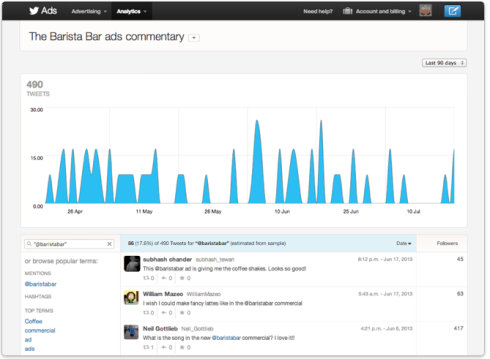 The  three tweets are from users talking about a Barista Bar TV commercial. Later Twitter updated its post with a new screenshot that now shows fake tweets from three Twitter employees.

It’s a minor misstep on Twitter’s part, but embarrassing, nonetheless. William Mazeo, one of the users credited with a fake tweet in the original image, tweeted back after Twitter’s apology and said: